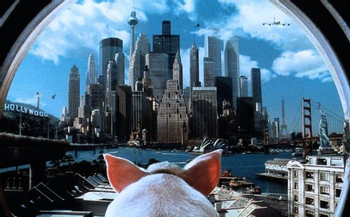 The City of Everywhere is a setting which only exists in comedic works. It usually claims to be one or more famous cities from Real Life, but contains an inexplicable and highly suspicious selection of features from all over the Hollywood Atlas. The City of Everywhere often has an assortment of landmarks and local color which in Real Life obviously couldn't be found on the same continent.

See also Where the Hell Is Springfield?. Compare Informed Location.

CN City, where all of the Cartoon characters of Cartoon Network from 1992-2006 live and work.

CN City, where all of the Cartoon characters of Cartoon Network from 1992-2006 live and work.