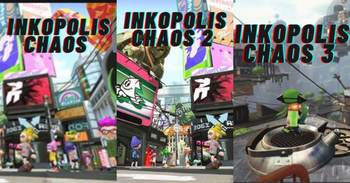 The Inkopolis Chaos Trilogy is a collection of 3 Splatoon fanfictions made by CrystallicWolf108. The stories all focus on different topics, while using the same/similar cast of protagonists. The first story focuses on proving Natalie’s innocence to the police, when she was falsely accused of theft, and left homeless for a year. The second story focuses on The Octobusters, a group of racist inklings who wish to get octolings out of Inkopolis. The third story introduces the Big Bad, Lieutenant Obsidian, and the heroes must stop her from destroying all life on the surface.

The trilogy can be read here