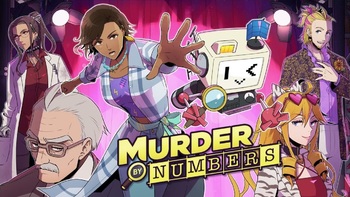 Murder by Numbers is a 2020 Puzzle Game Visual Novel developed by Mediatonic and published by The Irregular Corporation. Heavily marketed as "Picross mixed with Ace Attorney", the game consists of solving murder mysteries while collecting evidence by way of solving nonograms.

It's Los Angeles, 1996, and Honor Mizrahi is having a tumultuous summer. After leaving her abusive ex-husband Ryan, she finds she's been fired from the detective show she works on for no apparent reason—and worse, her friend Blake has been murdered. Honor finds herself playing detective for real as she begins to unravel the many mysteries she finds herself in with the help of her new companion—the flying Robot Buddy SCOUT, who's missing his memories.

Honor vows to help SCOUT regain his memories and prove she can strike out on her own, but as the bodies pile up, it becomes clear that someone is invested in SCOUT, who may be more than he seems...

The game was released in March 5th, 2020 for the Nintendo Switch, and March 6th on PC online stores such as GOG

No relation to the 2002 film with the same title.