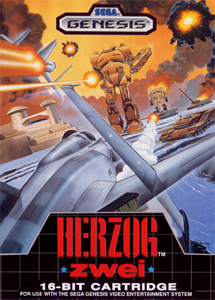 Herzog Zwei (German for "Duke Two") was an early Real-Time Strategy game developed by Technosoft and released in 1989 for the Sega Genesis. It is the sequel to the Japan-only 1988 Strategy Game Herzog for the MSX.
Advertisement:

Herzog Zwei is an early example of a game with a feature set that falls under the contemporary definition of modern Real Time Strategy (RTS). The game is also a predecessor to a more modern strategy/action hybrid, the Multiplayer Online Battle Arena (MOBA). Herzog Zwei was also a precursor to the Hero Shooter, as it was also a shooter/strategy hybrid with a Hero Unit.

In the game, two opposing players each control a robot that can transform into a fighter jet. This robot is used to build and deploy weapons such as motorcycles and tanks across a battlefield. Infantry can be used to capture neutral and enemy bases, which provide fuel for the mecha, money, and places to deploy weapons from. If one player's mecha is destroyed, it simply regenerates at its headquarters after a few seconds. The game is won by using units to destroy the enemy's headquarters.

Zwei is the end of the series, but Airmech is heavily enough inspired by it to be nicknamed Herzog Drei by some. It's also been confirmed to receive a Sega AGES release for the Nintendo Switch, with the addition of online play.