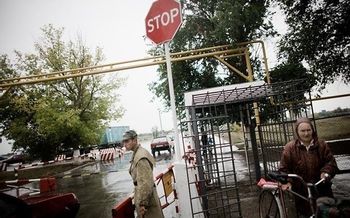 An entrance checkpoint in Znamensk.
Advertisement:

The Real Life equivalent of Hidden Elf Villages. A very Soviet phenomenon, they still exist in modern Russia and Kazakhstan, although many cities are now "open". The internal term is "closed administrative-territorial formations" = zakrytye administrativno-territorial'nye obrazovaniia or ZATO in Russian.

Appeared from the late 1940s onwards.

These are entire cities that foreigners cannot enter and Russians need a permit to live in, being subject to movement restrictions. Some were physically surrounded by barbed wire, with armed guards. They were referred to only by a postal-code and did not feature on Soviet maps. They were located in remote areas. These cities were usually there to serve the needs of defense industrial complexes or classified research institutes. Most of them were not large enough to be considered cities proper, more like towns, but they were planned and built as full complexes of urban infrastructure, unlike naturally evolved Russian towns, which resemble overgrown wooden villages with a few apartment blocks thrown in. However, those closed cities that already existed as cities before the Revolution were true cities; none of these remain closed today.

Note that living there was not necessarily bad - it involved (and to a lesser extent, still involves) reasonably good and prestigious if secret work, lots of cool if sometimes dangerous stuff happening, and various privileges such as a temporary exemption of local businesses from taxes in the Nineties.

Other closed areas existed elsewhere in the Warsaw Pact, especially on the border between West Germany and East Germany.

There are even closed cities in countries outside the former Pact. Several US towns that housed the researchers for the Manhattan Project were temporarily closed, and the towns of Dugway, Utahnote Home to the primary biological and chemical weapons testing grounds of the US military, and Mercury, Nevadanote Located in the Nevada National Security Site, formerly known as the Nevada Test Site, which was the primary site for nuclear weapons tests until they ceased testing in 1992, it still houses staff who work on various subcritical nuclear tests are still closed to the public. Access to Foulness Islandnote Home to a weapons testing range, an ordnance disposal area, a live-ammunition training range for the EOD units of the British military, as well as several former ranges and an area previously used for nuclear weapons tests in the UK is also restricted to civilians outside of residents of the two villages on the island.

44 are acknowledged to exist today in Russia, but c.15 more are believed to exist.

Some of them were or are: