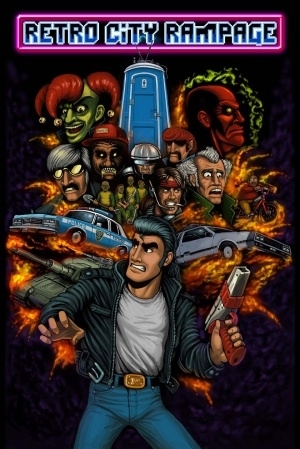 The entire open-world is in danger.
THE PLAYER is out for a friendly frolic of CRIME CAPERS when suddenly ambushed by EVIL GOOD GUYS. They will stop at nothing to end his RAMPAGE OF DOOM threatening the citizens of Theftropolis City. Are YOU bad enough to defeat the EVIL GOOD GUYS?
Advertisement:

The game's original developer, Brian Provinciano, built his own homebrew engine for NES development, and started work on a Retraux demake of Grand Theft Auto III. After overcoming programming limitations by moving the game to the PC, he started adding in other various references to the characters from his childhood, including, but no doubt not limited to classic games such as Super Mario Bros., The Legend of Zelda, and Bionic Commando.

As these references became more and more prevalent, Brian decided to make the game an entirely new game as opposed to a straight Retraux demake, and the result is the game that you see before you.

On November 2015, a spiritual successor titled Shakedown: Hawaii was announced. It was released in May 2019.