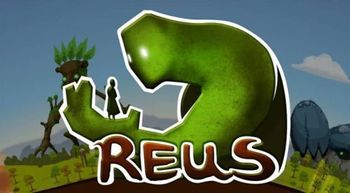 Reus is a 2013 PC game by Dutch indie developer Abbey Games, later ported to Playstation 4 and Xbox One in 2016. The game mixes elements of puzzle and god games by having the player try to make a planet as habitable as possible for humans. This is achieved by controlling four Giants that can essentially shape the environment at will. The Giants are, for all intents and purposes, Physical Gods; they raise mountains, dig deep oceans and create plants and animals with little more than a wave of their hands. The Giants are:
Advertisement:
Advertisement: