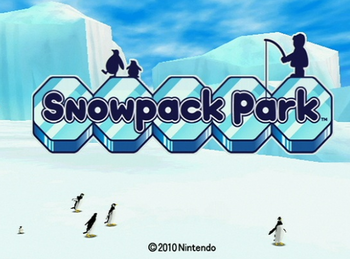 Nintendo commissioned Skip, Ltd.—the makers of Chibi-Robo!—to make them a WiiWare game. 2010's Snowpack Park is the end result, and it as every bit as odd—and strangely entertaining—as would be expected from Skip. It plays out like a cross between Pikmin, Chao Gardens, and Mario Party. With penguins. And yes, it is as peculiar as it sounds.
Advertisement:

You are a well-meaning visitor to Snowpack Park, a frosty wonderland where penguins play and frolic. However, a blizzard closes off most of the park, and scares off a majority of the penguins. The park's caretaker—a weirdly anthropomorphic penguin himself—then enlists your help in getting some penguins back to the park. This involves traveling to various areas, and using various techniques to make them like you. Then you catch them, take them back, and continue to care for them—while enlisting their help for use in various tasks. Including mini-games which involve thorwing penguins around like there's no tomorrow.

There are also aliens, blowfish that turn into snowballs, and penguins wearing tiny musical instruments on their heads.

Just so you know what you're getting into.

This work contains examples of:
Advertisement: