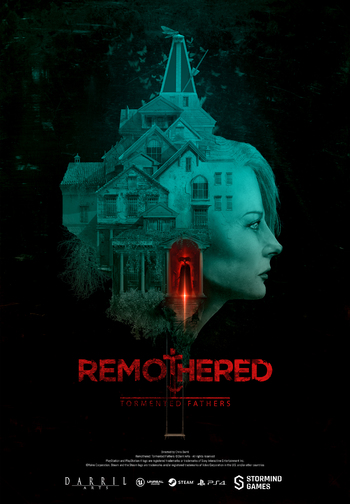 "That girl could be the answer to the torments of a lifetime for a lot of people, including me".
"Why did you grow up? Why did you become Jennifer?"
Advertisement:

An Italian love letter to the Clock Tower series as well as a homage to 1970's classic horror, and the brainchild of Chris Darril of Darril Arts since early 2010. After many development issues, Remothered was finally unveiled in early 2017 and is now planned to be released as a trilogy.

Tormented Fathers tells the story of Rosemary Reed, who visits the Felton Villa to investigate the disappearance of the Feltons' daughter, Celeste. A simple visit soon takes a turn for the sinister as Rosemary's investigation behind Celeste's disappearance soon uncovers a dark secret from inside the manor, especially as the missing girl was also referred to as the name 'Jennifer' for mysterious reasons.

The gameplay is stated to have a more realistic approach to survival horror, as the player will need to rely on their wits and stealth tactics to avoid dangerous individuals roaming around the area in search for Rosemary, as a head-on attack will always result in death unless a weapon is in hand, and even then it's only used if caught. These enemies dubbed as 'stalkers' are highly attentive and cannot be killed during gameplay, and will chase Rosemary down relentlessly if she is spotted.

The first game Tormented Fathers is currently available on Steam in Early Access as of October 31st, 2017, and was officially released on January 31st, 2018.

The sequel Broken Porcelain was released on October 13th, 2020. It takes place in the Ashmann Inn, focusing on a girl working as a maid after being expelled from the boarding school. It was expected to be released on August 25, 2020, but got delayed to October 13 of the same year. A teaser trailer was released in August 2019.