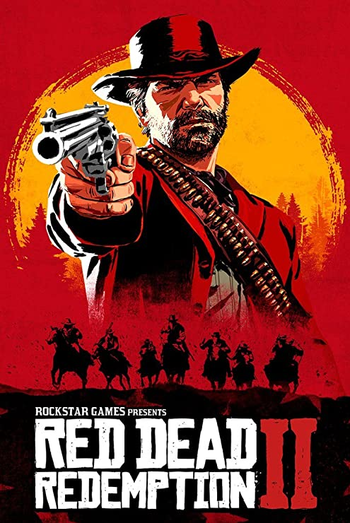 "We're thieves, in a world that don't want us no more."
"Nothin' means more to me than this gang, the bond that we share. It's the most real thing to me. I would kill for it, I would happily die for it."
— Arthur Morgan
Advertisement:

Arthur Morgan is not a good man. He has lived a life of crime for as long as he can remember, and his loyalty to the outlaw Dutch van der Linde and his gang is unmatched. John Marston, Bill Williamson, Javier Escuella and others – they're more than partners in crime. They're family. But the year is now 1899, and with the 20th century rapidly approaching, the age of gunslingers is coming to an end.

After a job gone wrong in the town of Blackwater leaves Arthur and company with lawmen, bounty hunters, and the Pinkerton Detectives on their tail, it seems that the Van der Linde gang is entering its final days – the law is more determined than ever to bring order to the frontier and destroy the outlaw gangs of the Wild West. Now Arthur must make a choice: remain loyal to the man who raised him and the ideals he lives by, or save himself and his friends from the fate that no doubt awaits them...

Gameplay follows the usual Rockstar open-world formula, but with an added emphasis on environmental interactivity. A new Dialogue Tree mechanic allows Arthur to make small-talk to every single NPC in the game, such as complimenting them or picking fights. The game also features more refined hunting and crafting mechanics, and has an increased focus on realism. You can no longer hold a massive weapons wheel worth of guns, for example, but must instead equip them from your horse. The game also brings back some of the RPG-esque mechanics from Rockstar's other games like Grand Theft Auto V, allowing Arthur to increase his stats by performing activities in the world.

The game also includes a substantial multiplayer component in the form of Red Dead Online, which allows players to make their own character and undertake a wide variety of jobs, side-activities, and PVP battles. Red Dead Online was released as a standalone game in December 2020.