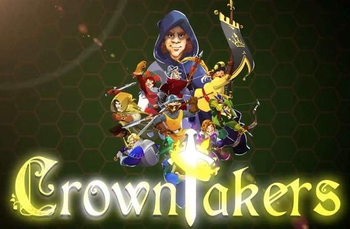 Crowntakers is a November 2014 Roguelike / Role-Playing Game, developed by Bulwark Studios and published by Kasedo Games. In it, your control the only remaining heir to the crown of King Jandric, who was deposed by Duke Tomas of Esire and thrown in a dungeon. All of his brothers fell in the battles with Duke's armies, but their sacrifice has weakened them to the point an illegitimate like you now has the chance to sneak into the castle with a small group and restore the rightful rule!

Well, at least, this is what King Jandric is hoping for. In practice, you have to make your way there from the backwater town you are in, across eight randomly generated maps, designed in the style of King's Bounty, Heroes of Might and Magic or Age of Wonders. And in order to get anywhere alive, it's necessary to find the mercenaries who can join you, the gold that will keep them on your side, and struggling to keep them all alive. Moreover, no enemy is content to wait idly for you, and so they all become stronger with every new day...