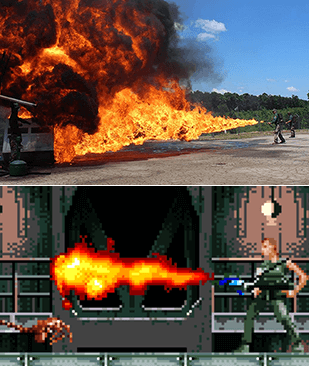 Considering how, between Kill It with Fire and Incendiary Exponent, fire has a habit of being portrayed as undistilled Rule of Cool, flamethrowers in Video Games have an odd habit of being Awesome, but Impractical at best. This tends to be down to a combination of Convection Schmonvection, Critical Existence Failure and a variant of Short-Range Shotgun; game flamethrowers tend to have a very, VERY short range, a narrow area of effect and do slow damage over time with very little disabling effect (or the disabling effect requires enough sustained fire you may as well use an instant-damage weapon), in many cases the effect is very temporary as well and wears off soon after.

This is in part because they tend to be based on Hollywood-style gas flamethrowers rather than real ones; typically their fuel acts like pressurized gas rather than burning liquid, creating a long flame rather than an arcing stream. Game limitations mean the flamethrower's typical use (destroying buildings) is rarely possible in-engine, neither is it likely to mask the firer's position with smoke and flames (or even create smoke). On the plus side, games rarely allow the fuel tanks to be targeted by enemies (though enemies seem to carry tanks of nitroglycerine rather than fuel on their backs if they have a flamethrower), or simulate how staggeringly physically debilitating it is to operate such a device.

There are also additional issues, for instance, burning enemies frequently damage you when close, yet the Flamethrower requires enemies to be close to use it (bonus points if other enemies are not damaged by the flames). Also, games (especially Sci-Fi ones) frequently put you up against mechanical enemies and make fire useless against them, yet even the weakest pistol can do some damage; this is hugely unrealistic, since flamethrowers are dangerous to vehicles for the same reason molotovs are; the fire and smoke can easily cause the engine to overheat or choke, burn or melt most circuit boards, and cause immense discomfort for any crew. Finally, flame propagation effects are very rare in games, so fire instantly dissipates in places that would be a fatal inferno in seconds in Real Life, not to mention that fuel itself rarely acts like napalm, slicks of intensely burning glue that coat every surface fired at.

A flamethrower that doesn't suck is usually a BFG. If a mook has one, it will probably suck, paint a giant target on his back and make him that much more evil for having it. Even if you can pick it up and use it yourself. If you can, it is almost a certainty that it won't work on the class of mooks who carry flamethrowers.

To an extent this is Truth in Television. Flamethrowers were widely utilized in World War I, World War II and the Vietnam War to destroy thick foliage and take out bunkers full of enemy troops, but their weight, short range compared to other firearms, rapid fuel consumption, and tendency to give away one's position have since made them fall out of use in favor of incendiary rounds for conventional weapons.

Has nothing to do with Video Game Movies Suck.

NOTE: Straight examples go into the 'Lame' section. The 'Flame' section further below is reserved for aversions and subversions only.