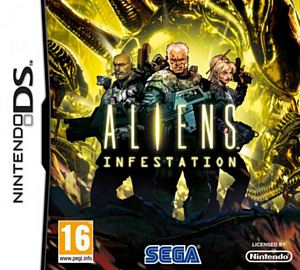 Not all of them will make it to the end.
Advertisement:

Aliens: Infestation is a 2011 side-scrolling Metroidvania game set in the Alien universe, developed by WayForward Technologies (of Contra 4 and Shantae fame) in collaboration with Gearbox Software for the Nintendo DS.

18 weeks after the Colonial Marines sent a distress call for backup in Aliens, a backup team from the U.S.S. Sephora arrives near LV-426 and finds the Sulaco adrift in space. A group of soldiers, including Captain John "Duke" Cameron, Private Brock "Bear" Paulson, Private Buddy "Brando" Whistler and Lance Corporal Samantha "Homewrecker" Johnston are dispatched to the derelict ship, where they discover that a group called the Union of Progressive Peoples (UPP) have boarded the ship and are attempting to harness xenomorphs, who are subsequently attacking them. After the Marines deal with the UPP soldiers aboard the ship, they travel down to the surface of LV-426 and discover a xenomorph hive, as well as several friendly Marines trapped in desperate circumstances. It's up to the core group to rescue their fellow soldiers and destroy the alien presence on the planet once and for all...

The game originally began life as a handheld port of Aliens: Colonial Marines for the Nintendo DS, but was subsequently changed into a standalone product due to the latter title's Troubled Production. It bridges the plot between Aliens and Alien³, as well as incorporating story ideas from William Gibson's unproduced script for the third film (namely, the Union of Progressive Peoples).

Most of the tropes applicable to the Alien franchise in general, as well as Aliens specifically, also apply here, for obvious reasons.