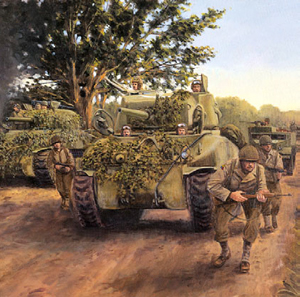 A notable series of squad-level historical wargames. They use simultaneous turn resolution ("WeGo") and place an emphasis on historical accuracy. The series features an incredibly detailed simulation of ballistics, armor, and penetration, especially as it relates to tank armor; things such as ricochets are fully modeled, as is individual vehicle component damage. The difference types of cover and concealment are also modeled in-game with meticulous detail - rifle bullets can potentially punch right through drywall, for example, and a mortar shell will go straight through a thin sheet-metal roof. The series is also extremely easy to mod, and boasts a robust built-in scenario and campaign editor.

There are currently three games in the original game engine, and seven titles in the second generation (most with additional add-on modules, noted):

Shock Force
A fictional "near-future) war set in 2007 between the U.S. and Syria.
Marines
British
NATO
Afghanistan
Takes place during the Soviet-Afghan War in the 1980s.
Normandy
Beyond Overlord's setting remade in the new CMX 2 engine.