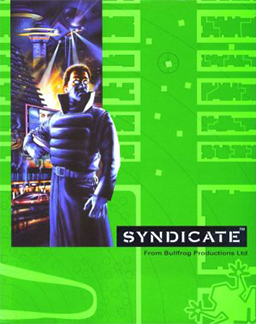 Wonder what he's up to.
Advertisement:

Syndicate is an Action / Strategy hybrid developed by Bullfrog Productions and released in 1993 for the Amiga and IBM Personal Computer. An FPS reboot was made in 2012 by Starbreeze Studios and Electronic Arts.

A short description for this game could be: World domination simulation.

For its time, Syndicate had impressive graphics, environments, AI, and gameplay freedom. It is notable as an early example of a video game Villain Protagonist, and its portrayal of evil acts while totally lacking karmic or moral punishments. It is now available at GOG.com

if you still have yet to pick it up.

In a Cyberpunk dystopian future, the world is controlled by powerful syndicates ruling it through the police and military. The vast majority of the population just takes it because they spend much of their time on the cybernetic equivalent of happy pills. You take the role of the evil overlord of one of these syndicates and control a team of cyborg killing machines, or, as you call them, agents, that follow your every command in a quest to achieve complete world dominance.

This can be separated into two parts. The first is the world view where you plan out your nefarious schemes. Here you outfit your team, allocate resources to research to get better equipment, acquire intelligence, and choose the next territory to take over. Taking over a territory means performing a mission.

The second part is the tactical view where you actually do the mission by controlling your team of up to 4 agents. The tactical view sports an isometric view and some pretty impressive (for the time) environments: Cities, army bases, secret research facilities etc. that are convincingly "alive," busy streets have people and cars going about their business, trains that can be ridden, cars that can be driven, army bases have drilling soldiers and so on. These environments also react convincingly to your actions, with civilians running away from your agents when they draw their weapons, police trying to stop them, and Stuff Blowing Up when they shoot it.

Your agents can carry quite a lot of equipment like miniguns, uzis, med-kits, rocket launchers, but the most exotic piece of equipment is the Persuadertron. This device allows you to brainwash civilians and enemies into helping you, if they have (or get) a gun they'll even shoot at your enemies.

But if you think you can go around just persuading people, you are wrong. This! Is! Syndicate! And it is impossible to finish the game without killing, mayhem, and ruthless disregard for property!

Still, the game lets you have quite a lot of freedom in how you actually accomplish your missions, for example, if your mission is to assassinate someone, you can:

The game was followed by an expansion pack, American Revolt. Now ruling the world, EuroCorp has lost control of the Western Hemisphere, and a series of rather difficult missions are needed to subdue it.

In the sequel, Syndicate Wars, the Syndicate has been managing the world for some undisclosed time, until an experimental mind-expanding program goes wrong. The scientists running it Go Mad from the Revelation, becoming "The Nine," heading the Church of the New Epoch. They spread a "Harbinger" Computer Virus that destroys the globe-running UTOPIA network and the chips in people's heads as the start of their Evil Plan, which you must either thwart or advance. Also available at GOG. 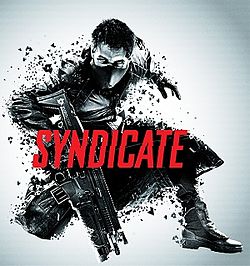 A reboot of the series was released in February 2012 but unlike its predecessors, the new Syndicate game is an FPS written by Richard K. Morgan. You play as Miles Kilo, a new Agent under EuroCorp implanted with a prototype DART chip which grants him cutting-edge hacking abilities. Initially assigned to assassinate a key figure of rival syndicate Aspari while being mentored by more experienced Agent Jules Merit, Kilo soon discovers there is more to things that meets the eye. The game is linear with Kilo a silent protagonist and most of the story coming through cinematics or the environment.

A four-player co-op mode is also included, where you play as one of four Agents under upstart rival syndicate Wulf Western going against other syndicates, including EuroCorp. A demo for co-op was released 1 February 2012 for Xbox 360 and PS3, showcasing the Western Europe level.

The most commonly referenced game element is "breaching" — real-time hacking of not only your environment, but also your enemies. The Persuadertron has been subsumed under this function, along with the ability to make enemies "Suicide" by holding a grenade or making their weapons explode through "Backfires". Everything Is Online, and the adrenaline surge of killing mooks translates into processing cycles, and thus more "breaches." This was, however, criticised by some as a "glorified use key."