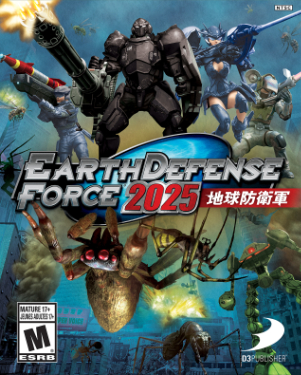 The Ravagers have sprung up from underground to invade Earth once again and it's up to the Earth Defense Force to stop them. If you're familiar with the previous games in the series, you should know what to expect: players will take control of a foot soldier and gun down any-and-all Godzilla-sized bugs, robots, and other monstrosities the Ravagers sics at Japan (and you).

Unlike Vicious Cycle's Insect Armageddon, this installment retains the B-Movie charm and sense of scale the series is known for. Taking cues from all three of its predecessors (most notably Earth Defense Force 2), the game features four playable classes this time around. Rangers, the standard infantry unit; Wing Divers, female soldiers equipped with jet packs to fly; Air Raiders, support soldiers that can call in air strikes, vehicles, and other support items; and Fencers, walking Powered Armored men with long-range artillery, a sledgehammer, pile bunker, and dual-wieldable chainguns. Enemy variety has also been stepped up along with the addition of online multiplayer for up to four players, allowing you and your three other EDF team-mates take on the Ravager horde together.

The game was released on July 4, 2013 in Japan, February 18, 2014 in North Amercia, and February 21 in Europe for PlayStation 3 and Xbox 360. The game had several pre-order bonuses, depending on where you pre-ordered the game, but has become available for free. One of them in Japan was a crossover with Dream C Club where Mian and Setsu are featured in 2025 as balloon decoys for your Ranger and Air Raider respectively to use in combat if purchased directly from D3 Publisher. Dream C Club: GoGo also featured the Pale Wing's uniform from the Japan-exclusive Earth Defense Force 2. GameStop pre-orders offers the Air Raiders Weapons Pack, which includes a gold-coated model of the BMO3 Vegalta with a combat burner to throw flames and take flight for short periods of time when equipped plus Pure Decoy Launcher (Setsu). Amazon pre-orders offers the Ranger Weapons Pack, which includes Volatile Napalm Discharge Device and the Pure Decoy Launcher (Mian).

An Updated Re-release titled Earth Defence Force 4.1: The Shadow of New Despair was released for PlayStation 4 in December 2015, which was also released on Steam in July 2016.

The EDF will show the Ravagers what we've got with these tropes:

The Russian Badger explains that, while Fencers in the game Earth Defense Force 4.1 are technically Mighty Glaciers due to their slow speed, exploiting their dash cancel makes them faster than the Wing Divers.

The Russian Badger explains that, while Fencers in the game Earth Defense Force 4.1 are technically Mighty Glaciers due to their slow speed, exploiting their dash cancel makes them faster than the Wing Divers.