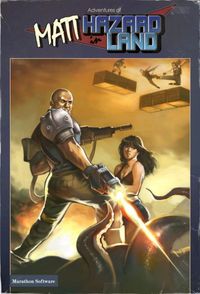 The year is 1983, and the world is first introduced to Matt Hazard, eight-bit video game hero with more firepower than pixels, through debut title The Adventures of Matt in Hazard Land, published by then-fledgling company Marathon Software. In the following years, Matt starred in dozens of games; some were immensely popular (such as western A Fistful of Hazard, 3D shooter Matt Hazard 3D, and 1995 spy shooter You Only Live 1,317 Times), while taking the series in new directions (such as the ill-conceived kart racer Haz-Matt Karts and the non-violent water gun game Soak'Em) was... bad, causing people to stop buying the games and hence putting Hazard out of a job.

However, the new CEO of Marathon (now called Marathon Megasoft), Wallace "Wally" Wellesley wants to bring Matt Hazard back, and he's set to star in their first Next-Gen title. The only catch is that they intend to kill him off at the end of Level 1 to introduce a new hero.

Matt... is not too happy when he learns that.

Eat Lead: The Return of Matt Hazard is a 2009 cover-based third-person shooter with more Medium Awareness and Fourth Wall breaking than you can shake a sprite at. In further defictionalization, it's been followed in 2010 by Matt Hazard: Blood Bath & Beyond, a homage to Contra.