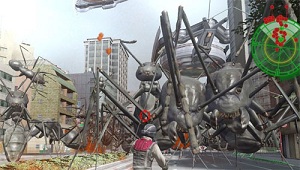 The events of the game see you assume the role of a soldier known only as Storm-1, a member of Storm Team in the eponymous Earth Defense Force, in order to fend off an invading extraterrestrial army. Said army happens to consist of giant ants, giant spiders, UFOs, gunships, several flavors of titanic robot, some Godzilla-sized monsters and a mothership powerful enough to kill you and everyone you've ever met.

The game later received an Updated Re-release on the PlayStation Vita as Earth Defense Force 2017 Portable featuring online multi-player and the return of the Pale Wings. A Spiritual Successor to this title, Earth Defense Force: Insect Armageddon by Vicious Cycle, is also available on the Xbox 360, PlayStation 3, and Steam.

A direct sequel titled Earth Defense Force 2025 was first released in Japan on July 4th, 2013 for Xbox 360 and PlayStation 3. The game was later released in North America on February 18th, 2014 and then in Europe on February 21st.

Not to be confused with the Shoot 'em Up game, Earth Defense Force by Jaleco or the other EDF (Extraplanetary Defense Force)

Good luck out there!

All right men! Show those Ravagers who's boss with these tropes!