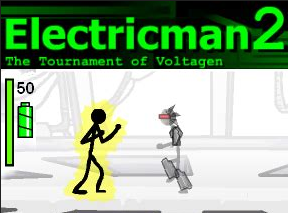 Electric Man is a series of fighting games made in Adobe Flash by an Australian software engineer Damien Clarke. The earliest mention of these games dates to about 2007

All games use Stick Figure Animation and have the same premise: the titular Electric Man competes in the Tournament of Voltagen against whole teams of opponents, until he reaches the final boss battle against Death itself (along with its skeletons). The most well-known one is Electric Man 2: Tournament of Voltagen, because it has been featured on the largest number of Web Game websites, like Newgrounds and Stickpage. However, the latest version is actually Electric Man 4

, which can be played by following the link, even though it still has the Electric Man 2 title screen.

Has nothing to do with a 1993 game Electroman.