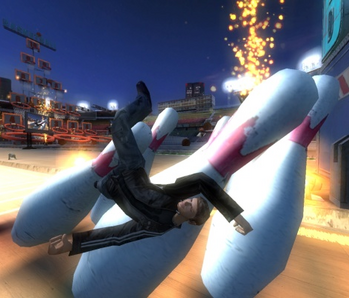 For a long time, most advancements in video game realism have been in visuals; adding detail and resolution to the environments simulated. A recent trend, however, is to increase the realism of objects, their physical properties, and how they move.

In practice, this means simulated objects that are not fixed in place; they break if struck, slide if pushed, and follow parabolic trajectories if thrown. The first objects to get the treatment were projectiles, like grenades, but the practice has expanded to include the majority of objects found in the game world. Especially enemies, be they alive or formerly alive.

Since simulating the complex interchange of balance and animation required to actually pick up an object is beyond the flexibility of most present game engines, many games that allow object manipulation employ some form of invisible force: a tractor beam or telekinesis are the most popular choices.

The name comes from the somewhat unrealistic action of dead enemies. They are not usually modeled with realistic joint stiffness or motion ranges, causing their limbs to bend at impossible angles (without breaking) and flop randomly in response to stimuli like explosions. Perhaps a telling view of the attitudes of many gamers, corpses get a lot of attention whenever physics engines are discussed.