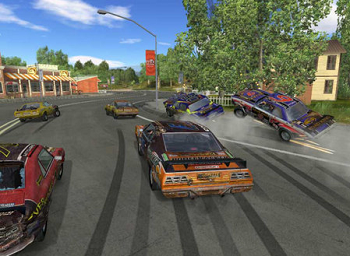 FlatOut is a franchise of Racing Games originally created by Finnish developer Bugbear Entertainment (who also made Rally Trophy). The FlatOut series is notable for its physics engine, which it uses to simulate lots and lots of crashes, wrecks, personal injury, crashes, complex object interactions, vehicle damage, and crashes. There is a lot of crashing.

Not to be confused with Fallout.