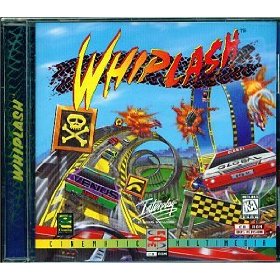 That's gonna hurt in the morning...
"It's Fatal Racing!!!"
Advertisement:

Fatal Racing (known as Whiplash in the US) is a PC racing game by Gremlin Interactive that can best be described as Race Drivin' meets Destruction Derby. Eight teams of two race on courses until either all human players have crossed the finish line (or are destroyed 3 times) or only one car is left running on the track.

Supporting up to 16 players over an IPX network (unusual for its time, as it's a DOS game), fiendishly difficult to the end, the game didn't catch on as most computers of the time struggled with the graphics (unless you had one of them newfangled 3dfx Voodoo cards that came with a 3d accelerated version). A decent Pentium was needed to play the game with SVGA graphics and all the graphics options turned on.

A couple additional notes: The majority of the examples below refer to the unpatched v1.0 Fatal Racing. A patch for Fatal Racing was made, and the US version, Whiplash, uses this "2.0 patch," which fixes a few bugs and changes a couple of options.