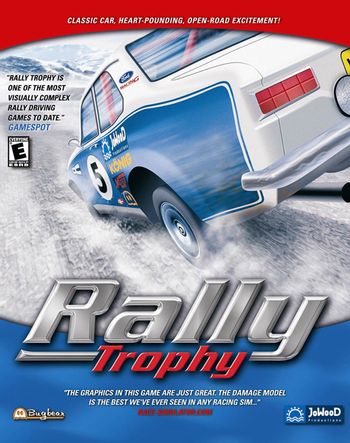 Not your average rally sim, kids...
"Ummm... let's change seats... whaddyasay ?"
— your co-driver, after you've plunged your car into another crashfest
Advertisement:

Rally Trophy is a rally racing simulation game, the commercial debut of Finnish driving game developer Bugbear Entertainment note better known these days for their Black Comedy demolition derby game series, FlatOut, first published by JoWood Productions in autumn 2001. The game was in development since the late 1990s and became a surprise hit, with lots of critical acclaim by players and reviewers alike.

It deviates from other existing rally games by being a retro-themed title, focusing on various classic rally cars from the 1960s and 1970s. It generally aims for a realistic simulation of these cars of yesteryear, which means they lack various fancy technical enhancements and upgrades of Present Day rally cars. Thanks to an advanced physics model, driving them actually feels like driving a vintage car, making the game fairly Nintendo Hard, but enjoyable and challenging nonetheless.

and its developer site can be seen here

. Patches, wallpapers, etc. are still downloadable from the official site.

This game features the following tropes :