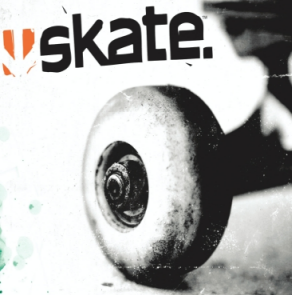 Skate is a skateboarding game series created by the late EA Black Box. It is most well known for its innovative "flick it" controls. The player character is a customizable Heroic Mime skateboarder in the fictional city of San Vanelona.

Skate (stylized as skate.) was the first game in the series, released in September 2007. It introduced the games analog-stick-based controls. In this game, the player character begins his career in San Vanelona, recovering from being hit by a bus, becoming more famous, unlocking new areas with new challenges and activities, getting sponsors, and being featured on two magazines. A Wii and DS spin-off called Skate It was later released, with the Wii version utilizing the Balance Board.

Skate 2 was the sequel to the first game, and was released in January 2009. This game added the series' "Hall of Meat" feature, where players can control themselves while bailing and receive scores for the damage caused, distance, speed, rotation, etc. It also added the ability to play as a female character. The player is released from prison several years after the first game and most of San Vanelona has been destroyed by a disaster. It was rebuilt by Mongocorp, a corporation with a very anti-skater agenda. Mongocorp has gone out of its way to discourage skating by posting security guards at many places and putting caps on rails, making them impossible to grind. Much of the game involved freeing areas from Mongocorp's grip and unlocking new areas.

Skate 3 released on May 11, 2010, and featured new modes such as Hardcore mode and Create-a-Park. The game also put a much bigger emphasis on creating online skate teams and doing challenges online.

On June 18, 2020, EA announced during their EA Play Live online event that a new Skate game is now in development with series creative directors Chris Parry and Deran Chung working on the project. On January 27, 2021, it was announced

that a new Vancouver-based development studio called Full Circle was created to develop the game, with former Xbox Live GM Daniel McCulloch leading the team. The game will be a free-to-play title.

The Skate series provides examples of: