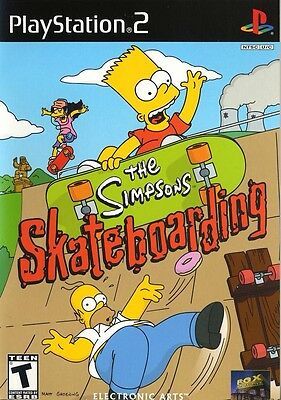 The Simpsons Skateboarding is a skateboarding video game based on the animated sitcom, The Simpsons that was released for the PlayStation 2 in North America on November 13, 2002. The game was developed by The Code Monkeys and published by Fox Interactive and Electronic Arts. The story and dialogue were crafted by writers from the show, with all character voices supplied by the actual cast.

In the game, Springfield has been converted into a skate park for the Annual Skate Tour, full with skate-able objects and landmarks from the television series. Players are able to choose one of the nine characters available to compete for the grand prize. All of the characters' voices were recorded by the actual voice actors from The Simpsons.

Each character has over forty unique moves. Players can test their skills in either a two-player head-to-head skate off or in one of the fast and furious modes: Freeskate, Skate Fest, Trick Contest, and a game of skateboard H-O-R-S-E. Players can unlock additional characters, locations, and skateboards and can also choose to learn all the skateboard moves and tricks before they begin the actual game in the Skillz School mode.