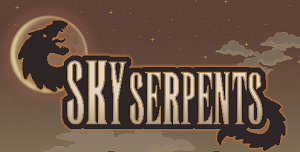 Shadow of the Colossus, only with flying serpents.
Advertisement:

is a browser game by Nitrome.

In it, a boy decides to challenge his father's record of slaying 14 sky serpents. He runs off, and you get to play through fifteen levels, each of which consists of damaging parts of a long, linear boss while avoiding enough projectiles to survive and not get thrown off too much.