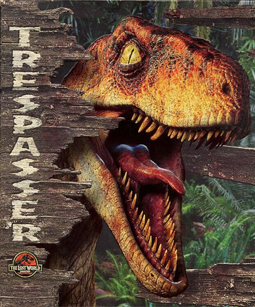 A lost world is a sort of scientific myth. An evolutionary scenario in which an ecosystem is isolated and preserved. The rest of the world changes, leaving a tiny, fragile pocket where ancient species survive.
— John Hammond
Advertisement:

Jurassic Park: Trespasser is a First-Person Shooter game released in 1998 for PCs by Dreamworks Interactive, developed as a tie-in to the film The Lost World: Jurassic Park. The game stars Anne, a plane crash survivor who finds herself on the shores of Isla Sorna, also known as Site B, two years after the events of The Lost World, and desperately needs to find a way off the island, armed with nothing but her wits and one lone (surprisingly strong) noodly arm for her to pull boxes and throw rocks around with.

A fan remake is currently in development.