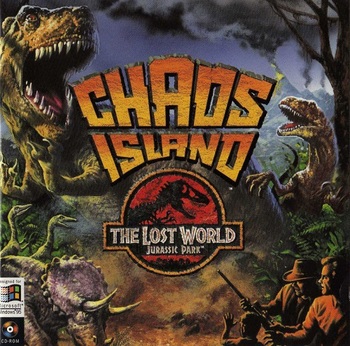 Jurassic Park: Chaos Island, also known as Chaos Island: The Lost World Jurassic Park, is a 1997 tie-in video game for The Lost World: Jurassic Park. The player takes control of all the main protagonists from the movie—Ian Malcolm (Jeff Goldblum), Sarah Harding (Julianne Moore), Nick Van Owen (Vince Vaughn), Eddie Carr (Richard Schiff), and Kelly Curtis (Vanessa Lee Chester), who are all voiced by the original actors—to enact the basic premise of the film: they are sent to Isla Sorna, "Site B", where John Hammond and InGen created the dinosaurs for Jurassic Park four years after the events of the first movie. Disaster eventually strikes and the heroes need to escape from the island. On the way, they are harassed by the Hunters, who plan to take dinosaurs off the island to make a profit, and by the dinosaurs themselves, but can hatch their own dinosaurs using a DNA serum which allows them to control them. It's basically Command & Conquer with a Jurassic Park wrapper.