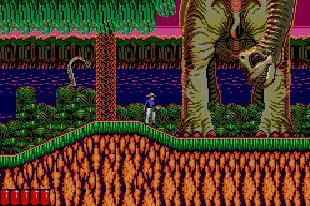 Developed by Sega for the Sega Master System in 1993, this Action Game is one of the various videogame adaptations of the first Jurassic Park film.

Sometime prior to the opening of Jurassic Park the security systems fail, causing dinosaurs to break through the electric fences containing them and feast on the park's staff. Dr. Alan Grant, here a full Action Hero instead of an Action Survivor paleontologist, is called to Nublar Island to handle the main dinosaur threats in four damaged areas so that the park can be safely opened to the public as scheduled.

The game has 4 levels that can be played in any order. Each one begins with a rail shooter section while Grant drives to them. Once that's done with, in the action sections Grant is armed with three weapons to take down dinos coming from ahead, above and below. Upon clearing all four levels, the final one featuring the T. Rex becomes available if the player got there without using continues.