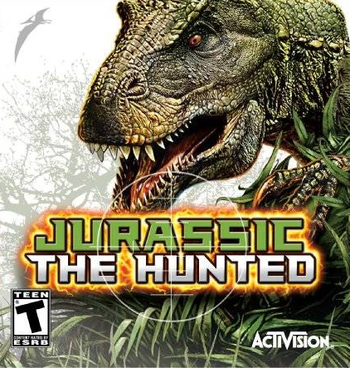 "What the foxtrot is going on here?"
— Craig Dylan in Jurassic: The Hunted
Advertisement:

Jurassic: The Hunted is a First-Person Shooter developed by Cauldron (the guys that make Cabela's hunting games) and published by Activision for PS2, PS3, Xbox 360 and Wii in 2009.

In the game you play as Craig Dylan, a former U.S. Navy SEAL, who now works for a private security firm with his war buddy Armando "Rock" Depiedra (no relation to that other rock). You've been hired by Sabrina Sayrus, whose father went missing years ago above the Bermuda Triangle. After getting sucked out of his plane by a bolt of freaking lightning, Dylan awakes and finds himself isolated from the others on a strange jungle island. Within seconds of beginning to look for friends, he's attacked by a pack of raptors! It isn't until much later, though, that he actually acknowledges them as dinosaurs, initially convinced that they are big lizards. The rest of the game follows Dylan and his team as they try to get off the island and discover why the heck it's covered in dinosaurs, exploding mushrooms, and prehistoric scorpions.

Jurassic: The Hunted borrows its control scheme from the Call of Duty franchise, both of which are published by Activision. In fact, it even has a Nazi Zombie-inspired mode called "Survival". But the Nazi zombies are replaced with teleporting dinosaurs, which might have made this the best game ever, had they included any multiplayer options whatsoever. In both modes you can use a bullet time feature that when activated highlights the vital organs of those nasty reptiles. This was probably added because of the developer's previous work on Cabela's.