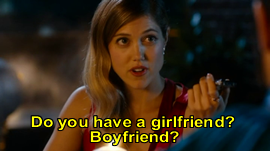 When a character is romantically or sexually attracted to another, they want to be sure that their heart is unattached before forming a serious interest or possibly even ask them out on a date. The question might either be an open inquiry — "Do you have a boyfriend?" — or the fake presumption of a significant other that only waits to be corrected — "Your boyfriend is very lucky" "I don't have a boyfriend". To avoid unnecessary embarrassment, sometimes the character might choose to learn the relationship status through a friend.

In addition, if the love interest turns out to be single, the character might:

If the love interest turn out to be attached, the character might:

This trope reflects Truth in Television, as it is sensible to know someone's relationship status before forming an interest and risking being rejected.