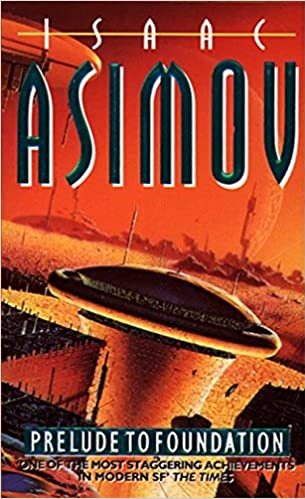 First published in 1988 by Isaac Asimov, this prequel is set decades before the events of The Foundation Trilogy, featuring Hari Seldon as the main character. These events are known as "The Flight" In-Universe, and Seldon is convinced to begin seeking a way to predict the future with psychohistory, despite his belief that it cannot be made to work.

The details present in the 1020 F.E. edition of the Encyclopedia Galactica have an incomplete record of these events, providing a contrast to the "real story" of how Seldon attempted to avoid capture at the hands of Emperor Cleon I, and his Chief of Staff, Eto Demerzel. Seldon has recently participated in a mathematics convention, where he described "psychohistory", as a set of maths that might, under extremely limited conditions be possibly able to maybe predict probabilities in a constrained environment. The emperor and Demerzel realize that Seldon could very easily be used, and if he won't be used by them, they plan to prevent him from being used by anyone else.

Seldon encounters Chetter Hummin, who encourages his escape and helps provide locations of safety and forewarning of Demerzel's lackeys. He hides Seldon in Streeling University, where he meets Dors Venabili. Then they escape to the Mycogen sector, where they believe themselves to be the descendants of Aurora. Seldon angers the leadership of Mycogen, and they escape again, this time to the Dahl sector, where they meet Yugo Amaryl and Raych. Eto Demerzel's forces are closing in, however, so Hari, Dors, and Raych escape to the Wye sector.

Once there, they learn the Mayor of Wye has recently abdicated in favour of his daughter, Rashelle. She wishes to use Seldon and his "psychohistory" to take control of Trantor and the Inner Worlds (not caring about the entire empire as it affects her too indirectly). It takes an intuitive understanding of individual psychology to rescue Seldon now, and he's realized how to take the lessons learned here to save himself and begin true work on Psychohistory.

This story is followed by a Sequel, Forward the Foundation.

Prelude to Foundation provides examples of:

"[H]e exudes a kind of trustworthiness so that his victim will trust him, even if he has a blaster in his hand." — Gleb Andorin, describing Raych in Forward the Foundation.