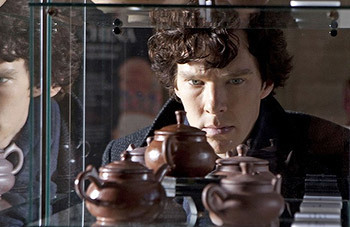 "Fourth floor. That's why they think they're safe. Put the chain on the door, bolt it shut. They think they're impregnable. They never consider for a moment there's another way in."
— Sherlock Holmes
Advertisement:

Holmes is hired by an old frie-... acquaintance to investigate a mysterious break-in at a bank in the City. Although nothing was stolen, the bank is concerned that someone was able to get in undetected and want Sherlock to find out how, but Sherlock is more interested in the symbols the intruder spray-painted onto an office wall. He discovers they are a coded message intended for an employee of the bank, who is later discovered dead in his flat. The next day, a journalist is killed and the same symbols are found nearby. Holmes and Watson follow a trail of clues that link the two dead men to a Chinese smuggling ring, who are trying to retrieve a valuable item that one of them stole. Holmes eventually cracks the coded message based on Suzhou numerals and a book cipher, but not before Watson and a female friend are kidnapped by the criminals. Holmes rescues Watson's friend but the leader of the gang escapes. After escaping, the leader of the gang is in communication with her superior, who is identified by the initial "M". She is then shot by a sniper. Holmes figures out that the banker was killed because he took a piece of jewellery from one of his shipments as a gift to his girlfriend, not realizing how valuable it was.