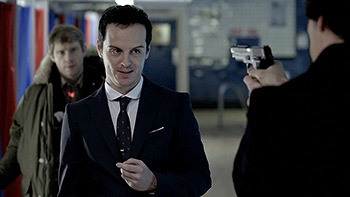 The third episode of the first series of Sherlock. The episode starts in Belarus, with Sherlock declining a case from a grammatically-challenged prisoner. Return to London, and Sherlock is bored. Very bored. So bored that he starts shooting walls which, naturally, John isn't very happy about. John decamps to Sarah's house just before a massive explosion blasts out the windows of 221b.

John returns to the flat to find Mycroft requesting that Sherlock find some missing missile defence plans. Despite having nothing on, Sherlock claims to be busy — a claim which comes true minutes later when he receives a phone call from Scotland Yard. Turns out that the explosion was a bomb which destroyed the whole house across the road — all save a strongbox containing a rather familiar phone. The phone plays five pips (the sound of the Greenwich Time Signal) before displaying an image of the flat below Sherlock and John's.

In the flat is a pair of shoes, Sherlock's examination of which is interrupted by a phone call from a woman with explosives strapped to her — or, more accurately, someone using her as a voice to disguise their own. Sherlock has twelve hours to solve the mystery of the shoes before the woman blows up.

Sherlock goes to the lab at Bart's to analyse the mud on the shoes, where he is joined by John and, later, Molly. Molly has brought along her ostentatiously camp new boyfriend, Jim from IT. Sherlock breaks Molly's dreams of romance by informing her, in a typically Sherlocky manner, that her Jim is gay causing her to run from the room. Poor lamb. However, don't let that keep you down for long, as Sherlock solves the case and informs the bomber via blog post. The woman is saved and cut loose, and Sherlock receives another message.

Sherlock solves the problem and another two, along with recovering the missile plans on the side. John goes out to Sarah's place while Sherlock, being Sherlock, decides to arrange a meeting with the mysterious bomber. Of course, it's not all that straightforward — first it seems that the bomber is John, then that John's been stuck in a bomb. And they're surrounded by snipers.

We finally meet the mysterious Moriarty, who turns out to be Jim from IT. A "consulting criminal" who's spent years solving other people's problems, he's delighted to have found a proper challenge, and couldn't care less about the missile plans. All of this has been for his own amusement, and to show Sherlock exactly what he's capable of. He fully intends to kill Sherlock someday, but doesn't want to end his fun just yet; he's saving that up for something truly special. However, if Sherlock keeps interfering in his affairs, he will do worse than kill him. "I will burn the HEART out of you."

With that cheery message delivered, he swaggers off and takes his snipers with him. Sherlock removes John's bomb and it looks like everything's going to be alright, but then —

Jim's back! With more snipers! And danger! There doesn't seem to be any way for the duo to avoid death. Then Sherlock points a gun at the bomb.

Cut to the credits and an eighteen-month wait.