Strapped to a Bomb 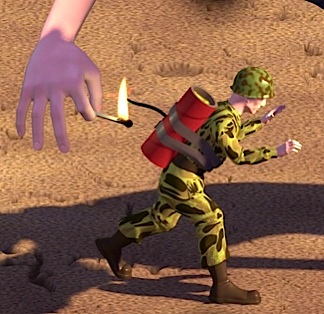 "Look, guys! Strapped to a bomb on my first day!"
— Skyler Murphy, Interns of F.I.E.L.D.
Advertisement:

A favorite execution method of Dastardly Whiplash types, this trope involves the villain tying a captured character to an armed explosive device. Cue frantic searches for the Conveniently Placed Sharp Thing and attempts to disarm the device while still tied up (for example, a memorable scene in a Scooby-Doo, Where Are You! episode where Shaggy and Scooby attempt to put out a bomb fuse with their butts). Generally, though, disaster gets averted by the Big Damn Heroes showing up to get their pal out of Dodge before he/she gets blasted to a pile of thin gruel. Bonus points if the rescue team cuts it so close that they and their rescuee wind up Outrunning the Fireball afterward.

It operates on a similar principle to Chained to a Railway, in that it's essentially a timed Death Trap. However, the myriad ways to trigger a bomb means that villains can have lots of fun with this... for instance, rigging the bomb to go off when somebody tries to rescue the victim (this is sure to mess with the victim's psyche a lot, and can also subvert a Big Damn Heroes moment by turning it into a Senseless Sacrifice.)

See also Death Trap and Bound and Gagged, as this is a Sub-Trope of both, and Explosive Leash and Why Am I Ticking?, which are Sister Tropes. Strapped to a Rocket is another Sister Trope. Riding the Bomb is also closely related.