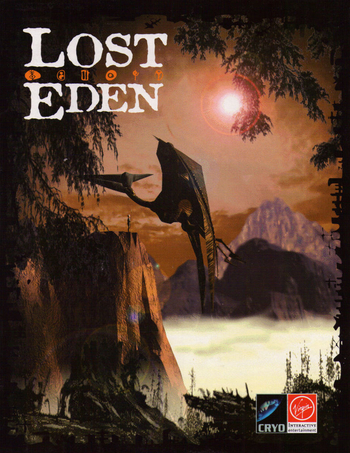 "My name is Eloi, and I am old. These days, I am content to look out at the world, from high in the White Arch. But when I was younger, I traveled the world, and saw many great wonders, and of all the tales I could tell, none is more wonderful then that of Adam, Prince of Mo..."
Advertisement:

A beautiful point-and-click Adventure Game for DOS PCs and Apple Macintosh from 1995, developed by Cryo Interactive. The plot follows Adam, the young prince of Mo, in his quest to unite various races of Men and various species of Dinosaurs. The game features nice puzzles, a detailed backstory, impressive graphics for its time and a truly awesome soundtrack.

The story itself is fairly simple; a long time ago in an alternative version of Earth, dinosaurs and humans lived together in harmony. Then, the evil army of Tyrann came down from the north, threatening to destroy everything. To stop them, a great human king rose from the kingdom of Mashaar. This King was known as the Architect, and he designed citadels to be built by dinosaurs while humans fed and protected them. This provided human armies an impenetrable garrison from which to defend, protecting whole regions from Tyrann attack. The evil predators were beaten off, and kept confined to the far north, too afraid to attack.

Then, the Enslaver, the son of the Architect, came to power. He hated all of the dinosaurs, and most humans too. He tore down most of the citadels, and the trust that once united humans and dinosaurs was lost. After the Enslaver died, the human king Gregor came to power in Mashaar. At about this time, the Tyrann returned in force, this time lead by a truly horrifying creature calling himself Moorkus Rex. At first, Gregor fought the Tyrann, but after the loss of his wife and daughter, he lost the will to fight and permanently withdrew to the last remaining place of safety, the Citadel of Mo. Years later, you play as Prince Adam, heir to the throne of Mashaar. You have lived all your life in this safe haven. You have come of age, and long to see the world, but your father forbids it. The game begins when a Pterodactyl named Eloi arrives at Mo with news from the north...