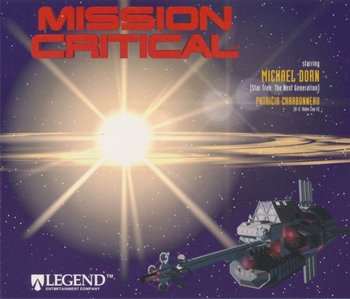 Mission Critical is a 1995 first-person Adventure Game with RTS elements from Legend Entertainment. Gameplay Roulette was implemented fairly well here with the strategy elements being almost optional (the player can adjust the Difficulty Level from Easier Than Easy to Harder Than Hard on-the-fly). The game features Full Motion Video when interacting with people or during cutscenes and is prominent for casting Michael Dorn of the Star Trek: The Next Generation fame, as well as Patricia Charbonneau, best known from Desert Hearts (both being shown very little, as the game is not focused on interacting with people). The gameplay style is reminiscent of Myst, as it is in first person and the player has to search locations, uncovering the past. Unlike Myst, however, several critical puzzles are timed. Unfortunately, the timer is not shown, so the player is often left guessing. For example, the first puzzle involves preventing the meltdown of the ship's nuclear reactor. Also, if the player takes too long solving the puzzles necessary to start the strategy portion of the game, the game will end in a Non-Standard Game Over. The game also features an optional RTS portion, which involves the player directing the ship and its Attack Drones to destroy the enemy forces, made up of the same type of units.

The game's Backstory is fairly detailed, although finding out about it is not necessary to complete the game. You can read a summary of it and the game as a whole here.