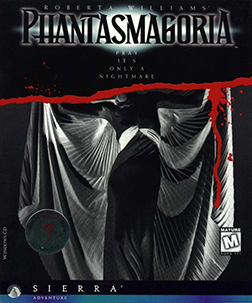 Consumite furore...
"Women were swooning in the aisles at the gory realism of his spectacles. For the uninitiated, Carno's shows are not for the faint of heart as they feature occult images, the black arts, torture devices, bodily amputations; of course, all accompanied by a generous dose of screams, shrieks, howls—and frightening organ music. Those of you up to thrills and chills won't want to miss this!"
— Review (in-universe) of Carno's Phantasmagoria Show
Advertisement:

Phantasmagoria is a 1995 horror-themed adventure game developed by Sierra and written by Roberta Williams, better known for the King's Quest and Laura Bow series. Made at the height of the Full Motion Video boom in gaming, the game utilizes bluescreen technology to combine real actors with computer-rendered backgrounds. To this day Roberta claims this to be her best work, and it shows, given the long development period.

The story, which borrows quite heavily from The Shining as well as the works of Edgar Allan Poe, is as follows: Famous writer Adrienne Delaney and her photographer husband Don Gordon move into a large, fancy mansion, built and previously owned by an eccentric magician by the name of Zoltan "Carno" Carnovasch. While snooping around her new home, Adrienne discovers a mysterious box in a sealed-off chamber in Carno's study and, to make a short story even shorter, unwittingly unleashes something mysterious and ominous that later turns out to be a demon.

Not too long after the event, Adrienne's normally amiable husband starts acting uncharasteristically irritable and irrational, growing increasingly violent and picking up new bad habits. Over the course of seven days, extensive research and some very vivid paranormal visions lead Adrienne to uncover the mansion's dark history and the gruesome truth behind the suspicious deaths of Carno and his numerous wives.

While Phantasmagoria suffers from many of the problems common to FMV games, mainly less-than-stellar acting and somewhat limited gameplay, it is widely regarded as one of the better games to come out of the fad. Unlike oh so many other FMV titles, it actually manages to feel like a game you play instead of a half-arsed interactive movie, and the story, while not the most original piece of fiction, is well-constructed. Nevertheless, it became a hot seller and ended up becoming the best selling Sierra game of all time.

An In Name Only sequel, Phantasmagoria: A Puzzle of Flesh, was released in 1996. Aside from the full motion video and gruesome death scenes, the games have little in common in terms of setting and atmosphere, and the storylines have only a very loose connection.