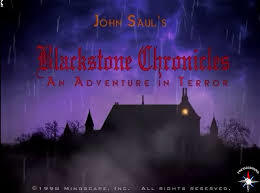 Based off of the John Saul novel series by the same name, Blackstone Chronicles is an 1998 PC Adventure Game with horror elements by Legend Entertainment.
Advertisement:

You play as Oliver Metcalf, son of the late Dr. Malcom Metcalf, the esteemed last administrator of Blackstone Asylum. Oliver has been brought there by his father in order to allow Oliver to...rediscover his past as the Black Figure, an agent used by Malcom to seek revenge on those who stopped the groundbreaking work he did at Blackstone. Otherwise, Oliver's son, Joshua, will take over his role as the Black Figure. In the process, he must discover what truly went on at Blackstone during his father's time there. Of course, this could all be a dream, a delusion, or something worse....