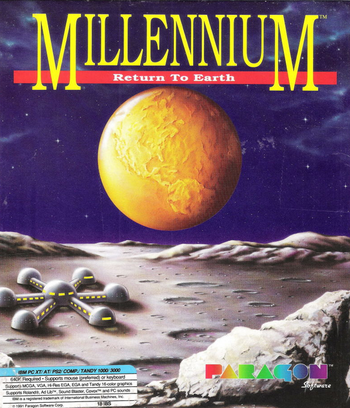 Millennium: Return to Earth (AKA Millennium 2.2) is a 1989 resource management game designed by Ian Bird and released for Atari ST, Amiga, and DOS PCs. Specifically, only the DOS version has the "Return to Earth" subtitle. The game is turn-based, where you can advance it by various time units (1 hour and 1 day) or until something interesting happens.
Advertisement:

At some point in the future, humanity has colonized the Moon and Mars. However, a 20 trillion ton asteroid then Colony Drops Earth, killing off the rest of humanity and making the planet uninhabitable. You are the commander of Moonbase, a small self-sufficient colony. The base has a number of facilities: habitats (more can be built), power generation (better reactors improve efficiency), production (for building pretty much everything), resource extraction (always active given enough power), research (discovering new tech and analyzing probe data), defense (controling Attack Drones and Kill Sats defending the colony), hangars (for outfitting, crewing, loading, and launching ships and probes), and storage (holding resourecs and/or certain items in special shelters that survive attacks). One of the first tasks is building and sending probes to other planets and moons in order to determine their viability as colony sites. It's worth noting that only Moonbase is self-sufficient. The other colonies are significantly smaller and lack any production, research, or storage facilities. They are only used for mining, and the resources must then be shipped to the Moon by transport ships. The Asteroid Belt can also be mined by special ships. But beware! The Mars colony believes itself to be the superior surviving colony of humankind, and will do their best to eliminate the Moonbase when it reaches its fingers out to the rest of the Solar System.

You can build several types of ships on Moonbase: Probes (unmanned, used to scout planets, moons, and asteroids), Grazers (medium-sized ships used for asteroid mining), Waveriders (small, fast ships used to quickly go between colonies to deliver supplies and a small amount of minerals), Carracks (large, slow ships used to deliver a lot of supplies and can carry a large amount of minerals), S.I.O.S. (single-use colony ships; even slower than Carracks), and Fleet Carriers (Martian-designed Attack Drone-carriers that allow one to strike another colony). There is no currency in the game, although each colony needs sufficient power for operations and various resources are needed to build anything.

In 1991, Ian Bird made a sequel for Amiga and Atari ST called Deuteros: The Next Millennium that takes place 800 years after the end of the first game with Earth as your primary world and much of the technology of the first game forgotten (including space travel). The game mechanics are very similar, although, eventually, Faster Than Light travel will be discovered, allowing humans to travel to and conquer other star systems. Additionally, Deuteros is much more difficult than Millennium.

has been made that updates the graphics and allows the game to be more easily run on Windows.