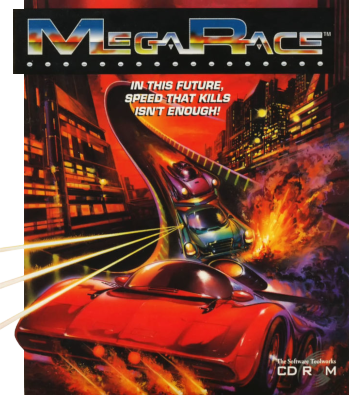 You've got to fight to finish!
"And now, VWBT is proud to present the show that squashes reality like a bug. That's right, you better be ready to: MegaRace!"
— The Announcer

Taking place in The Future, MegaRace is a series created by Virtual World Broadcast Television.note Or VWBT for short. Designed to inject a little excitement into the monotony of everyday life, MegaRace lets whoever is interested participate in high-speed races against vicious criminal gangs that the rule the roads of the future. The catch is that the races are entirely virtual, so no harm befalls anyone.

The host of MegaRace is the eccentric Lance Boyle, who initially encourages the contestants, but won't hesitate to insult them if they fail.

The entire trilogy is available on GOG.com and Steam.

Tropes throughout the series: