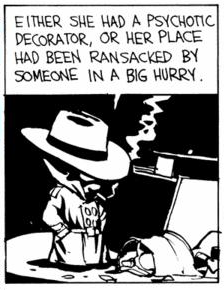 "Either that kid has a lightbulb up his butt, or his colon has a great idea."
— Dr. Cox from Scrubs, on an x-ray showing a lightbulb in a patient.

Either you're hallucinating after eating too much radioactive pizza last night, or you're reading a trope page about rhetorical comparisons like this one.

Sometimes, as a means of humour, or simply to argue for one possibility through ridicule of all possible alternatives, someone will frame a description or explanation as "either it was X highly unlikely set of circumstances, or it was Y straightforward apparent conclusion." (However, the X and Y can be reversed.)

Most often "Y straightforward apparent conclusion" is obviously the truth and the dichotomy is employed as means of snark or lampshading. However on occasion, this trope will be subverted to comic effect when the more bizarre conclusion turns out to be precisely correct instead, perhaps sometimes as An Aesop about not being too sure of yourself about what is possible and what is not.

If the characters decide that the mundane explanation is actually less plausible, it may be an Impossibly Mundane Explanation.

Sometimes also overlaps with False Dichotomy, when the ludicrous explanation isn't really the only alternative to the implied one. Talks Like a Simile is related. See also Occam's Razor. Not to be confused with an Asymmetric Dilemma, which is also about mundane things being contrasted with extreme things, but in more of an "and" way than an "or".

When a translator provides translations of this nature, it is the Either "World Domination", or Something About Bananas subtrope.