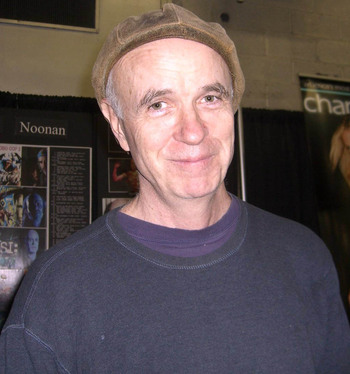 Tom Noonan (born April 12, 1951 in Greenwich, Connecticut) is an American actor, director, and screenwriter. Standing at an imposing 6’5 (1.96 m), he has played the occasional Gentle Giant, but is more associated with villains and (really, really) scary guys. He is probably best known for Manhunter—where he was the first actor to play Francis Dollarhyde, the Tooth Fairy—and also for Heat and Synecdoche, New York.

Noonan is the younger brother of the late actor and playwright John Ford Noonan. He was married to actress Karen Young from 1992 to 1999 and the couple have two children. He should not be confused with Tommy Noonan, a midcentury American actor who appeared in Gentlemen Prefer Blondes and A Star Is Born (1954).