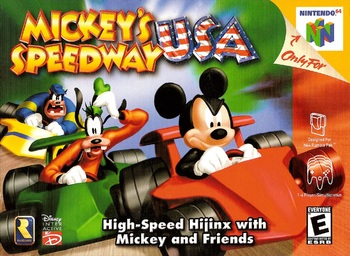 Mickey's Speedway USA is a Disney Mascot Racer game released for the Nintendo 64 and Game Boy Color in 2000 and 2001, respectively. It was developed by Rare and published by Nintendo and Disney Interactive Studios. The Game Boy Color version of the game is a sequel to Mickey's Racing Adventure.

Disney's answer to Mario Kartnote Though it plays more like, and uses the same engine as, Diddy Kong Racing, also developed by Rare, the game features Mickey Mouse and his friends racing together across The United States to... save Pluto?