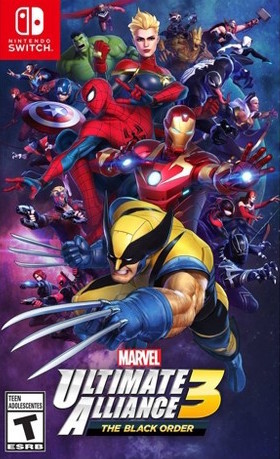 "If we wanna survive here, we do it as a team."
—Nick Fury
Advertisement:

Marvel Ultimate Alliance 3: The Black Order is an Action RPG released exclusively for the Nintendo Switch on July 19, 2019, ten years after Marvel Ultimate Alliance 2. While the first two games were handled by Activision's first-party Raven Software and Vicarious Visions studios, this installment is the first to be published by Nintendo and developed by recurring external Nintendo collaborator Koei Tecmo's Team Ninja studio.

When a new menace known as the Black Order threatens the universe by seeking out the Infinity Stones for Thanos, the Mad Titan, the combined forces of The Avengers, the X-Men, the Guardians of the Galaxy, The Defenders and more of Earth's (and the Galaxy's) Mightiest Heroes must band together against a common threat. But they're not the only ones looking to get their hands on the Infinity Stones, as various villains from across the Marvel Universe want to seek out their limitless powers for themselves...

The game features the largest base roster for an Ultimate Alliance title yet, with 36 playable characters in the base roster (more than either previous Ultimate Alliance title had after DLC) with 16 additional characters added as free and paid DLC. In addition, there are also a number of villains and non-playable characters. While the roster is largely based on characters who have been introduced within the Marvel Cinematic Universe (as is the trend for Marvel media since the success of The Avengers), several non-MCU characters also appear in order to further flesh out the setting.

On June 11, 2019, it was revealed that the game would be getting additional downloadable content through an expansion pass, which includes additional content based on Marvel Knightsnote officially titled Marvel Knights: Curse of the Vampire, released on September 30, 2019, X-Mennote officially titled X-Men: Rise of the Phoenix, released on December 23, 2019, and Fantastic Fournote officially titled Fantastic Four: Shadow of Doom, released on March 26, 2020, with potentially more on top of all of that. Each expansion features a new game mode called "Gauntlet", where the player's team goes through gauntlets of back-to-back challenges to earn items and new characters. The contents of the Gauntlet mode vary between expansions, each with its own storyline (for example, the Curse of the Vampire expansion revolves around a dangerous vampiric curse created by Morbius's latest attempt to cure himself of his condition). Aside from paid DLC, Colossus and Cyclops were added to the game for all players for free in the August 30, 2019 update (they need to be unlocked in a special Infinity Rift so players can use them).

The Black Order sends our heroes to the Asgardian underworld.

Example of:
Welcome to Hell

The Black Order sends our heroes to the Asgardian underworld.