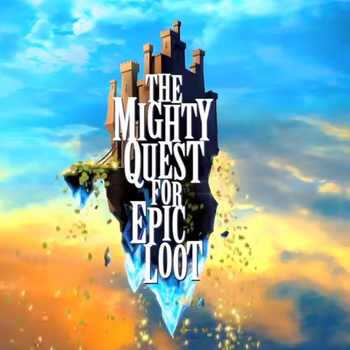 The Mighty Quest For Epic Loot was a free-to-play online browser game. Taking place in the kingdom of Opulencia, the game revolved around looting the kingdom's many floating castles, which players designed and built. The game was free to play, but players could buy gems with real money to spend on cosmetic items as well as on boosters.

The game was divided into two parts. The first part was largely inspired by Dungeon Keeper, with players designing their own castle and filling it with traps and minions. Players could upgrade their Castle Heart to increase the size of their castle, as well as how many traps and minions it could hold. Once the player was done, they needed to "validate" their castle, by running through it by themselves and setting a record time.

The second part of the game consisted of raiding the other players' castles. In this mode, the game played much like an action RPG. The Player's goal was to reach the end of the castle and the Castle Heart before the time set by the owner of castle in the validation mode. Failure to reach the end of the castle means that the player couldn't loot the resources of the owner, but could keep the resources and items found during the run.

The game had three currencies: Gold and Lifeforce, which could be either mined or looted from other players, as well as Gems, which were premium currency. The game also had four playable characters: The Knight, The Archer, The Wizard and The Runaway, with The Runaway being restricted to paying customers. Free players could choose only one character, but for Gems, players could unlock additional character slots.

The game's servers shut down October 25, 2016, just over a year-and-a-half after its full release and it is no longer available.

This game contained examples of: