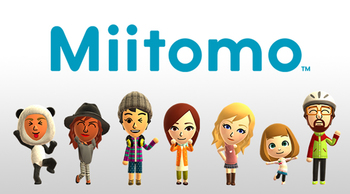 Miitomo was a free-to-use social networking mobile app developed by Nintendo for iOS and Android devices, serving as a pseudo-spinoff of the Tomodachi series. The app allowed users to converse with friends by answering various questions, and featured Twitter and Facebook integration. The app, Nintendo's first, was released in Japan on March 17, 2016, and worldwide on March 31, 2016, launching alongside their My Nintendo loyalty/rewards program (which the app is incorporated into). The app could only be used when connected to Nintendo's servers.

Miitomo was a conversational app where users could communicate with friends by answering questions on various topics, such as favourite foods or current interests. Similar to Tomodachi, players would use a Mii avatar which they could create from scratch or obtain from their My Nintendo account or a QR Code, and give it a computer-generated voice and personality. Users could add friends to Miitomo by communicating directly with their device or by linking the app to their Facebook and Twitter accounts. By tapping their Mii, users could answer various questions which would then be shared with their friends, while tapping their thought bubble allowed them to hear answers from other friends. Users could visit, or be visited by, other friends and were able to answer certain questions that were only shared with a specific friend. Players were also able to take pictures of their Mii, known as Miifotos, which could be shared with friends as well as posted online.

On January 24, 2018, it was announced that the app will shut down on May 9, 2018, after only two years of service, due to popularity dwindling soon after. Attempting to log into the game now would bring up a server maintenance error.

How much time do you spend on TV Tropes every day?
All day? Me too!