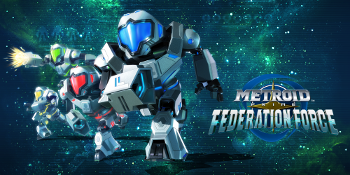 Metroid Prime: Federation Force is a 2016 Co-Op Multiplayer Metroid Spin-Off game for the Nintendo 3DS developed by Next Level Games. It is the 12th entry in the overall series, the 6th game in the Metroid Prime sub-series, and a Spiritual Successor to Metroid Prime: Hunters. It is also the sixth game in the franchise's chronology.

Following the events of Metroid Prime 3: Corruption, the eradication of Phazon has completely removed any attempt to harness its power for both the Galactic Federation and Space Pirates alike. To remedy this issue, the Federation enacts "Operation Golem", having their soldiers train in the use of special mechs based on Samus's Power Suit technology to combat new threats. During one of the first field missions, the Federation learns that the Space Pirates are also in the region and have come with some of their own solutions to the lack of Phazon as well, forcing the small group of soldiers out of field tests and into actual combat in order to make sure their plans don't come into fruition.

Federation Force is notably the only entry in the series where you don't play as heroine Samus Aran. Instead, you primarily control one of several nameless Galactic Federation Marines in a small squadron, though Samus does appear as a recurring NPC granting the Galactic Federation information as she investigates the Space Pirate threat separately. While the game's focus is on multiplayer, it is possible to play the campaign in single player, with the game offering a few methods to boost your firepower to compensate.

The game also includes a multiplayer sports game called Metroid Prime: Blast Ball, a soccer-like team game where you use your blaster to shoot the ball in order to score points instead of your foot. This side mode was the first aspect of the game announced, revealed during the E3 2015 Nintendo World Championship event without anything linking it to the Metroid franchise. The complete game was fully revealed during Nintendo's E3 Digital Event.