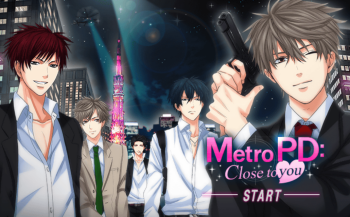 Starting today, you're with me.
Advertisement:

Metro PD: Close to You is a Romance Game Visual Novel by Voltage, Inc. for iOS and Android devices, in which the player takes the role of a rookie detective in the Tokyo police department. Stationed at the sleepy West Arai precinct, she rarely deals with anything more dangerous than the occasional Peeping Tom... at least, until she receives a sudden and unexpected transfer to the Special Investigations 2nd Unit, an unorthodox but elite group of case-closers working the city's highest-priority cases.

Partnered with one of these detectives, she struggles to pull her weight and keep up with the 2nd Unit's much faster pace and risky investigations. As they work cases and face danger together, they inevitably grow closer than simple partnership, and both of them must try to sort out their feelings and their case before the distraction ends up costing someone their lives.

Metro PD: Close to You provides examples of the following tropes: