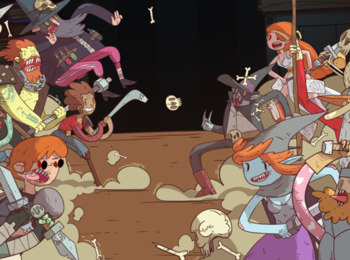 So our story begins, our Hero sets out, in search of the Lich, that miserable lout!
The Lich must be stopped, the Meteor mustn't fall, or the cycle will continue, consuming us all.
Advertisement:

Meteorfall is a Roguelike Deck Building Game series by Sloth Werks featuring a quirky, Science Fantasy setting and a giant burning space rock (the titular meteor) hurtling towards it.

To stop the annihilation of their charmingly dangerous and violent world, an offbeat assemblage of adventurers seek the Nukropolis to slay the fiend responsible for this crisis: The Uberlich.

Turns will be taken. Hands will be dealt. And legends will be born (or die horribly due to poor card strategies).

The Meteorfall deck consists of: